Madaari – A Tale of Vigilante Justice

During this past one week, I got to sample a variety of cinematic flavours at the movie theatres. The sampling started with Tamil megastar Rajnikanth’s much anticipated and eagerly awaited Kabali, and after two days of being witness to Thalaivar’s heady epic-ness, it was time to take off into space to follow the adventures of spaceship Enterprise, as its crew fought off aliens on a distant planet. For the uninitiated, I am talking about Star Trek’s third offering in the rebooted series – Star Trek Beyond. The sci-fi film with its distinct adventure flavour was a treat to watch.

By the time I was done reviewing Star Trek Beyond on my blog, Irrfan Khan starred Madaari had started to create a buzz not just at the box office but also across various social media platforms, and I knew I had to check this one out too.

Madaari, directed by Nishikant Kamat of the Mumbai Meri Jaan and Dombivali Fast (Marathi) fame, is a social thriller inspired by a real-life incident, with Irrfan playing the lead role of Nirmal Kumar, the quintessential common man who takes laws in his own hand to expose the political system and make the lawmakers accountable for the chairs they sit on.

Nirmal loses his son in a man-made tragedy and left shaken by the administration’s indifference and lack of accountability, he kidnaps the Home Minister’s son to get his revenge. Jimmy Shergil, another brilliant but underrated actor plays police inspector Nachiket Verma, assigned to head the search operation and solve the kidnapping case. And thus starts the thrilling chase across the country’s interior as the audience becomes a part of the kidnapper and his victim’s journey. 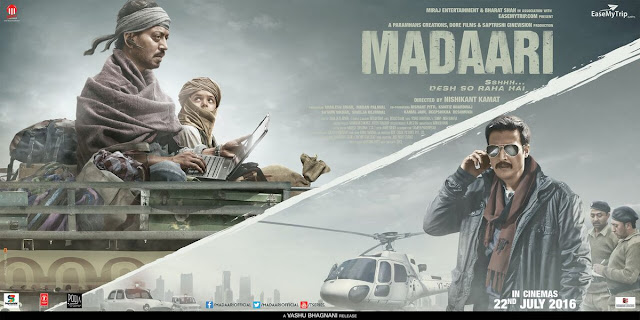 Some parts of the film are reminiscent of the battle of wits between Naseeruddin’s character (again a common man) and the police that the audience saw in the film A Wednesday, but even with its predictable treatment, Madaari makes for a must-watch. Irrfan’s power-packed performances especially his meltdown scene after his son’s death is heart-rending. The lead cast of Irrfan and Shergil is ably complimented by Tushar Dalvi who plays the Home Minister and Nitesh Pandey playing the role of journalist Sanjay Jagtap. So if you have not seen the film already, do take out time to appreciate this hard-hitting tale about vigilante justice.

Star Trek Beyond – Another Blockbuster Adventure in Space

Come on India, Let’s Dance It Out!

‘Play It Hot’ Played It Cold

Star Trek Beyond – Another Blockbuster Adventure...