So the good, happy and high (no puns intended) people at Bacardi have got all Christamas-sy and have organised this super cool blogging drive at Indiblogger – write about your favourite Breezer flavour and if you are lucky and write a really breezy (again, absolutely no pun intended!) post, you get to win a year supply of Bacardi Breezer. The first image flash after I read this was the delivery van outside my house taking out crate after crate of Breezer bottles. Whoa! What a sight! Very inspiring! Hahaha. The second image or rather thought was a quick mental calculation of the cost of a year supply of Bacardi Breezer. Double whoa! More inspiration. Haha. 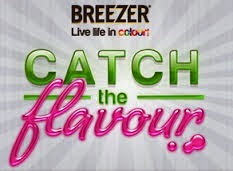 So I set down to plan my post. But first things first – select your favourite favour. The choice was from these six flavours:

Well, I knew that Cranberry and Blackberry Crush taste absolutely yum and refreshing, my taste buds were alien to flavours of Jamacain Passion and Island Pineapple. The remaining two – Lime and Orange, I had tasted and found them quite regular, with their distinctive and yet common tastes. So my safest and bestest bet was to hop on the Cranberry bottlewagon! But alas, this wagon was full to capacity already, a clear sign that Cranberry ruled the roost so far as popularity was concerned.

So that left me with Island Passion, my second favourite flavour, and I did not lose any time in joining this team lest I be stranded while other Breezer enthusiasts took off for Bacardi’s Breezerland. But despite being here, my heart was still set for Cranberry and I waited in the shadows, hoping for some seat on Cranberry bottlewagon to fall vacant, waited for some Cranberry enthusiast to change his mind and shift teams! I waited, and while I waited guess what I did! Guess, guess!

I PLAYED THIS SUPER FUN GAME!

Yes! This Breezer Catch the Flavour is so much fun and entertainment! You can choose to either bottle or package the Breezer and can speed up the game as per liking. For more fun, invite friends to play to compare your  Breezer bottling and packaging skills through your scores! Play it on your laptop or download it on your phone and play on the go!

And so while I waited, hoping to eventually become a part of my favourite Cranberry team, I became a pro at packaging and bottling! Cranberries, pineapples, limes, blackberries et al, all sorted in their respective bottles!

And while I mastered the game, seats in the Cranberry team fell vacant for me to hop onto it with much gusto! Yay to that!

So now that I have finally managed to catch Cranberry Express, here’s why I so love this flavour…But, well, before I wax eloquent about why Cranberry is my favourite flavour, here’s some some gyaan about Breezers first –  for all those who think it is an out and out alcoholic drink, or as some say in Hindi, that it is…eh…sharaab. This gyaan is sourced from wikipedia and can be cross-checked with various online forums and relevant websites. But then you can also check about the alcohol content right on the breezer bottle too.

Bacardi Breezer is a fruit wine-based alcopop with 4.8% alcohol in India, 4.4% in Australia, 6.6% in the United Kingdom and 4.5% in Europe. It comes in a variety of fruit flavours: lemon, peach, pineapple, apple, ruby grapefruit, lime, orange, blackberry, watermelon, cranberry, coconut, raspberry, blueberry, pomegranate, strawberry, and mango. In India, Bacardi Breezer was the first entrant in the ready to drink category.

So you see, Breezer is not an out and out alcohol beverage and has very little alcohol percentage. In fact many reviews about the product say that it’s a very peppy drink with strong fruity flavour. So now that the are basics of Breezer done with, here’s why Cranberry flavour is my favourite flavour!

MY DEBUT BREEZER! Cranberry was the first breezer flavour I ever tasted! After much apprehension about whether it was a hard drink or a soft drink and much debating about its alcohol content, it was my brother who finally convinced me to try one. And the choice of flavour too was his – ‘Try Cranberry, it’s quite fruity and you will like it.’ And needless to say, I absolutely loved it!

ALCOHOLIC SHERBET! It is rum mixed with fruit juice but it’s the fruity cranberry that wins over the rum. It tastes like fruit juice mixed with soda, giving a nice sweet and tangy flavour.

IT REFRESHES! Besides the good taste part, cranberry flavour is pretty refreshing too. If you thought that breezers will get you intoxicated, here’s this myth busted. It’s quite mild and just about tingles your tongue.

TINGLE & MINGLE! Like I mentioned earlier, Breezers have very little alcohol content, so this gives me a chance to mingle a bit more with those friends who are social drinkers and prefer hard drinks…so while they swirl their whiskeys and rums, I have my own fancy breezers to give them company! Better than the boring fruit juices!

ATTRACTIVE COLOUR! As much as the tangy flavour or rather the tartness of cranberries tastes good, the attractive orangy red colour too is very inviting! Plus it’s been packed so beautifully in cute glass bottles! Beatiful and inviting packaging!

So this was my take on my favourite Breezer flavour! Which one’s your favourite? Which flavour do you love to catch? Tell, tell! Share, share! 🙂

This post has been written for Catch the Flavour Blogging Drive sponsored by Bacardi Breezer in association with IndiBlogger.
Photo Courtesy: picturejockey dot com

Cooking for a Cause

The Curious Case of Idiyappam

The bottles look great and hope you will have fun receiving them soon.
Thanks for the download link for the game and many more thanks for visiting my blog 🙂

Wow! You've got more things to write 🙂 Miss you in Jamaican Passion, which was your earlier choice 😀

I really like the clinical finish to the post Ragini…and of course your post can be termed as Five Point Cran-Very-Someone! Cheers…Wanna see team Cranberry win…have written 2 posts on the same m/

Awesome one Ragini!! and even more so because it is for Cranberry 😀 For all we know the team will win because of this one! 🙂

I do love Cranberry but I have recently hopped on to Jamaican 😀 I could do Blackberry crush most days too 🙂 What does that make me? A flavour shifter?

Thanks for stopping by Bhargav! I found Jamaican Passion a bit bland. 😛 🙂

Thank you and three cheers for Team Cranberry! 🙂

Party time Seeta! Hope this does not get jinxed! 😀

Not a flavour shifter, just someone with many fine tastes may be! 😀

Thanks for stopping by Sammya! So wish Team Cranberry aces this one! 🙂

Congratulation !!!! Do let know when u are notified about the supply for the month…