All That Matters Is…

A stable, sensitive and concerned government matters, our cricket team performing superlatively all the year round and ruling the international rank tally matters, our films winning laurels at the Oscars matters, our sportsmen smashing Olympic records matters, love and affection matters, money matters, appreciation matters…gosh there are so many things that matter to me as an Indian. But I believe that on one level, these things matter for almost all of us. What really matters to me as an individual is FREEDOM.

I WANT FREEDOM FROM THE FEARS OF BEING A WOMAN IN INDIA. Let me make it very clear here that I am not a feminist. Not at all. I am against reservation for women anywhere and everywhere. I believe that when you support reservation or seek special favors just because you are a woman, you imply that you are probably weak or under-deserving to get anything on you own, just on account of you being a woman.

We all know how India was in the spotlight the world over on account of the horrific bus rape incident that happened in New Delhi. The furor condemning it lasted a couple of months, there were all kinds of protests condemning the incident, the outrage was palpable, following which the parliament passed a bill recommending harsher punishments for rapists. But this has hardly brought about any significant change at the ground level. Every single day, there are reports of molestation, kidnapping, harassment and the new menace, acid attacks.

No matter how mentally strong you are, no matter how much self belief you have, no matter how independently you have lived, every time you step out on Indian roads – be it a city road or a village trail, you steel yourself against the subtle and not so subtle harassment that you know will come your way, something that makes you feel like a hapless prey. There are times when I wonder whether it is too Utopian a thought to imagine gender equality taking roots in our country.

Utopian or not, I do not see it happening anytime soon here. Not unless there is a complete overhaul of the country’s attitude towards its women. Not unless lawmakers, policy makers, social workers, politicians and the people themselves all come together to speed up the change towards a gender-equal India, and make it a country that respects its women, a country where women are allowed to live free from fear and oppression. For freedom is all that matters.

This post is written as a part of ‘All that Matters‘ contest at BlogAdda.com in association with INK Live 2013. 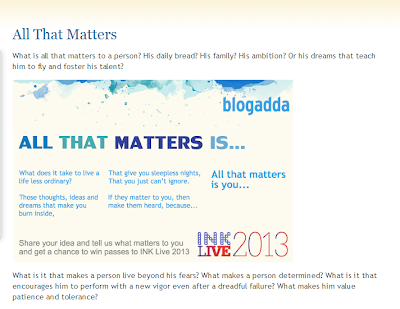 The Strangers on the Page

A Sniff Down Memory Lane

Lamentation on Death of a Puppy

Come on India, Let’s Dance It Out!

A country packed with hypocrisy will take its own share of time .. but I am hopeful of women getting the rightful space aside men and not reservations and hence discrimination yet again !!

The attitude towards women has to change. So many innocent girls have lost their lives, people in responsible position should act fast. I can't understand their snail pace in such matters.
Well said. Great post.

Time..yes, we have all the time in the world. Time and hope. Wo subah kabhi to aayegi!

Thanks for sharing your thoughts Indrani! Everything in country follows a slow pace. Trains, sarkari babus, court cases, the list is endless.

True. we all so much need that freedom from the fear of being a woman in India. Here's a post I had written sometime back abt it…
http://shaivikafunda.blogspot.in/2012/12/letter-to-santa-from-delhi-girl.html

This the heirloom we got bequeathed from a patriarchal society. We got a mind-set of treating women as commodities was set from the days of yore. I don't think that discrimination against women that got embedded in our minds will go off that easily.

I couldn't have put it any better.

Feel so good just reading such articles…this is a topic so close close to my heart, not just because I am a woman. Recently with blog activity have been able to really write, and not just for a prize or likes, as some have misunderstood. It is so rewarding to see other writers feel so strongly…. :))) nothing you so feel so strongly about as a human being will ever ever just disappear into space. God bless

Thanks for stopping by Shaivi and sharing your thoughts! Going on to your write-up now. 🙂

Exactly Easwer sir, I might be called a naysayer here but it is true that this patriarchal mind-set, and bowing to male-dominance is so deep-rooted, that it will take ages for us evolve into a gender equal society.

innerdialect, very heartening to see your motivating comments on the post. Thank you. 🙂

before i actually comment on the post, i would like to say something about freedom itself… no law can deem us as slaves… we have all the freedom we need to survive. but do we have the freedom to live? how free are we? are we free in our own minds? in our thoughts? in our choices? real freedom will be there when are free in our souls.. in our own minds… and so, freedom matters!

women ail not be free in this country if they want men to give them the freedom.

the travesty of decency that our country has seen is beyond measure, and if women seek freedom they have to now claim it. and i think it is because that a girl can now dare to be free that the men are getting to insecure, which is resulting in these heinous forms of subjugation… but do not worry, times are changing… i am more than you are… there will be a free world soon.

P.S. i love the name of your blog. solitary reaper… always loved the poem.

Indian Stretchable Time, we can stretch and stretch and stretch and if there is fast work being done then you should understand corruption is at its best. Sometimes we women are always dealt a tough hand by God and the men here always try to make it more difficult. They cannot look at us as equals, prejudice or is it a fear that we might be better than them, that makes them insecure.

Aersh, yes the freedom we have is sort of pseudo freedom. And no, I did not mean that men would give us freedom, but you see it is all inter related. The male-female ration is skewed, there are more men everywhere, and not just this…there's also this patriarchal mind set of the society. So it is a kind of vicious circle actually.

And thanks for liking the name of the blog. Solitary Reaper is my favourite poem since school. 🙂